One Hundred Deities of Bardo (中阴文武百尊) 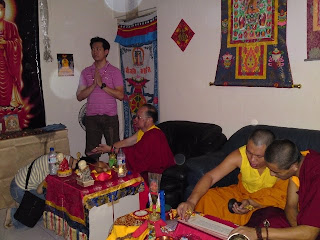 I wish to talk about the teaching of The Hundred Peaceful & Wrathful Deities of Bardo (an intermediate state of being between death and the next birth). We did the empowerment ceremony for the practice at Alice’s home recently. According to Tibetan Buddhism, if one practices The Hundred Peaceful & Wrathful Deities of Bardo diligently, not only will he cleanse his Five Sins of No Respite, he will also not fall into the Vajra Hell but will instead gain a swift rebirth in the Buddha Pure Land.

Any sentient being who has heard once the Mandala of The Hundred Peaceful & Wrathful Deities of Bardo, or the name of any of the deities, will not fall into the Three Lower Realms.

After hearing the teaching of The Hundred Peaceful & Wrathful Deities of Bardo, even one who has transgressed the Five Sins of No Respite will not fall into the Three Lower Realms, for it is “Liberation Upon Hearing” that will lead one to the attainment of Buddhahood. This is the most supreme teaching, as recorded in the Buddhist doctrines. Samantabhadra Buddha said, “Male or female yogis who pay homage to the hundred peaceful & wrathful deities will purify all their mistakes, including the broken samaya bond and bad karma, and they will be able to attain the common and uncommon accomplishments swiftly in their present lifetime.”

The Hundred Peaceful & Wrathful Deities of Bardo is the most supreme treasure that can benefit all sentient beings widely, through which one could attain Buddhahood without doing the practice. Guru Padmasambhava said, “This is a very special and supreme teaching, as one can attain liberation by simply hearing it – attaining enlightenment without practice, and attaining Buddhahood in a split second. It is the most profound method of attaining the perfect enlightenment, and also a method for freeing one of all negative karma created through wrongful actions. One who hears this teaching will not fall into the dark realms. It is a teaching only revealed to sentient beings who have accumulated great merits through their past practice. Upon hearing the teaching, one will receive great blessings and instantaneously attained Buddhahood.”

It is a hidden teaching (terma) transmitted by Guru Padmasambhava, not revealed to those without merits. It is generally unheard of by most people. But once you hear it, you will have the seed of Buddhahood planted within your being. You ought to know that Guru Padmasambha is someone who spoke of the true speech – the vajra speech.

The genesis of The Hundred Peaceful & Wrathful Deities of Bardo began in this samsaric world dating back eons ago. There was a Brahmin who possessed supernatural power but he was harmed by his student. The student was a prince who had also developed the Five Supernatural Powers. Out of jealousy, the student harmed his teacher and therefore fell into the Three Lower Realms and suffered great pains. Out of great compassion, Samantabhadra Buddha taught him the teaching of The Hundred Peaceful & Wrathful Deities of Bardo in order to end his sufferings. Upon hearing the names and heart mantras of The Hundred Peaceful & Wrathful Deities of Bardo, the student immediately received the magnificent power of blessing from Vajrasattva and Vajrapani, and he was liberated from the great sufferings and regained a human birth once more.

When you are free, you may visit our BuddhaEye website (www.buddhaeye.net) and take a look at the pictures of the hundred peaceful & wrathful deities. When you enter the bardo state after death, they will appear before you, one at a time. If you have not learnt this teaching and did not receive the empowerment, you will be frightened by their appearances, especially the wrathful ones, and run away from them instead. You might even blackout and become unconscious out of great fear. However, if you have received the empowerment and blessing, and you have seen their pictures in the past, you will recognize them and attain instantaneous liberation in the bardo state. When you recognize them and follow them, you are, in fact, following Samantabhadra Buddha - you will attain Buddhahood. So, it is possible for one to attain Buddhahood in the bardo state.

The Hundred Peaceful & Wrathful Deities of Bardo is a teaching that only requires “recognition”, without practice. Go visit the BuddhaEye website. Take a look at their pictures and store them well in your Alaya Consciousness. One day, when you die, you will see them in your bardo state. “Yes! I received the empowerment for this teaching in the past.” Follow the hundred peaceful & wrathful deities, and you will end up being born into the Pure Land of Samantabhadra Buddha. This is a very supreme teaching. 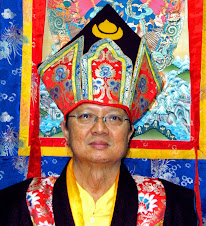 Acho Rinpoche is Giam Eng Leng, a Singaporean born in 1952, whose Buddhist name is Lotus Robe. He graduated from the Singapore Nanyang University in 1978, with BA (Honours)Degree. He took great interest in both western and eastern philosophies during his university study, specifically in the area of existentialism. Later, he switched to Buddhism, learning and practicing Buddhism for more than 30 years thenceforth. He took refuge in several spiritual masters including Zen Lin Ping (Kundalini Yoga), Venerable Zu Mo (Sutrayana), Venerable Da Xiong (Zen), H.H. Sakya Trizin (Sakya) and H.H Living Buddha Lian Sheng (True Buddha). He also established good connections with many other spiritual masters. In Dec 2007, he was recognized by H.E Konde Rinpoche from the Nyingma Dzogchen as the 3rd reincarnation of Acho Rinpoche. Konde Rinpoche is the abbot of Horthang Monastery of Nyingma Dzogchen in Qinghai, China. Konde Rinpoche subsequently held an enthronement ceremony in Singapore to formally recognize the reincarnation of Acho Rinpoche III. H.E Dzogchen Rinpoche and H.H Sakya Trizin also formerly supported his recognition as Acho Rinpoche III, among other Buddhist masters. Acho Rinpoche is a householder who practices pure spiritual conduct. He lives beyond name and form, practicing and helping the sentient beings in silence.